Marine animals fight daily for both food and survival, and this underwater warfare is waged with chemicals. As with plants, researchers have recognized the potential use of this chemical weaponry to kill bacteria or raging cancer cells. Scientists isolated the first marine-derived cancer drug, now known as Cytosar-U®, decades ago. They found this chemical, a staple for treating leukemia and lymphoma, in a Caribbean sea sponge. In recent years, scientists have discovered dozens of similar ocean-derived chemicals that appear to be powerful cancer cell killers. Researchers are testing these natural products for their therapeutic properties.

For example, scientists have unearthed several promising drugs from sea creatures called tunicates. More commonly known as sea squirts, tunicates are a group of marine organisms that spend most of their lives attached to docks, rocks, or the undersides of boats. To an untrained eye they look like nothing more than small, colorful blobs, but tunicates are evolutionarily more closely related to vertebrates like ourselves than to most other invertebrate animals.

One tunicate living in the crystal waters of West Indies coral reefs and mangrove swamps turned out to be the source of an experimental cancer drug called ecteinascidin. Ken Rinehart, a chemist who was then at the University of Illinois at Urbana-Champaign discovered this natural substance.

PharmaMar, a pharmaceutical company based in Spain, now holds the licenses for ecteinascidin, which it calls Yondelis™, and is conducting clinical trials on this drug. Lab tests indicate that Yondelis can kill cancer cells, and the first set of clinical studies has shown that the drug is safe for use in humans. Further phases of clinical testing—to evaluate whether Yondelis effectively treats soft-tissue sarcomas (tumors of the muscles, tendons, and supportive tissues)—and other types of cancer—are underway.

Led by the German scientist Paul Ehrlich, a new era in pharmacology began in the late 19th century. Although Ehrlich’s original idea seems perfectly obvious now, it was considered very strange at the time. He proposed that every disease should be treated with a chemical specific for that disease, and that the pharmacologist’s task was to find these treatments by systematically testing potential drugs. 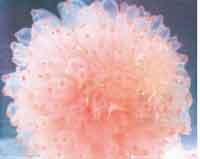 Animals that live in coral reefs almost always rely on chemistry to ward off hungry predators. Because getting away quickly isn’t an option in this environment, lethal chemical brews are the weaponry of choice for these slow-moving or even sedentary animals. A powerful potion comes from one of these animals, a stunningly gorgeous species of snail found in the reefs surrounding Australia, Indonesia, and the Philippines. The animals, called cone snails, have a unique venom containing dozens of nerve toxins. Some of these venoms instantly shock prey, like the sting of an electric eel or the poisons of scorpions and sea anemones. Others cause paralysis, like the venoms of cobras and puffer fish.

Pharmacologist Baldomero Olivera of the University of Utah in Salt Lake City, a native of the Philippines whose boyhood fascination with cone snails matured into a career studying them, has discovered one cone snail poison that has become a potent new pain medicine. Olivera’s experiments have shown that the snail toxin is 1,000 times more powerful than morphine in treating certain kinds of chronic pain. The snail-derived drug, named Prialt™ by the company (Elan Corporation, plc in Dublin, Ireland) that developed and markets it, jams up nerve transmission in the spinal cord and blocks certain pain signals from reaching the brain. Scientists predict that many more cone snail toxins will be drug leads, since 500 different species of this animal populate Earth.

A poison produced by the cone snail C. geographus has become a powerful new pain medicine.

The cancer drug Taxol originally came from the bark and needles of yew trees.

Are researchers taking advantage of nature when it comes to hunting for new medicines? Public concern has been raised about scientists scouring the world’s tropical rain forests and coral reefs to look for potential natural chemicals that may end up being useful drugs. While it is true that rainforests in particular are home to an extraordinarily rich array of species of animals and plants, many life-saving medicines derived from natural products have been discovered in temperate climates not much different from our kitchens and backyards.

Many wonder drugs have arisen from non-endangered species, such as the bark of the willow tree, which was the original source of aspirin. The antibiotic penicillin, from an ordinary mold, is another example. Although scientists first found the chemical that became the widely prescribed cancer drug Taxol® in the bark of an endangered species of tree called the Pacific yew, researchers have since found a way to manufacture Taxol in the lab, starting with an extract from pine needles of the much more abundant European yew. In many cases, chemists have also figured out ways to make large quantities of rainforest-and reef-derived chemicals in the lab (see main text).