Development of the upper limb begins at around day 24 of gestation, when arm buds of the somatopleuric lateral plate mesoderm, capped by their overlying ectoderm, begin proliferating bilaterally in the lower cervical regions. Over the following 4 weeks, these buds enlarge and differentiate, and with the added migration of other cell types into the buds from deeper embryonic structures, form all the tissues of the limb.

As the limb bud elongates, it must differentiate in three axes to provide the complex structures of the limb: proximodistal, craniocaudal and dorsoventral. The first manifestation of this patterning is the appearance of the apical ectodermal ridge (AER), a thickening of specialised ectoderm that runs craniocaudally along the rim of the limb bud tip. The AER maintains limb bud growth and influences the differentiation of the proliferating mesoderm, being laid down beneath it in a region called the progress zone (PZ) (Fernandez-Teran and Ros, 2008).

(This section is authored by: Benjamin Way & Bran Sivakumar)

Factors secreted from the AER influence gene expression in the PZ mesoderm, most importantly the genes encoding fibroblast growth factors (FGFs). As the limb bud grows, it ‘lays down’ mesoderm and variations in PZ gene expression during this process result in the generation of different skeletal elements in each upper limb region. Central to this are the Hox genes in the PZ mesoderm, which undergo a transcription cascade with HOXD9 and HOXD10 expressed in the arm segment, HOXD11the forearm, and HOXD12 and HOXD13 in the carpus, metacarpals and phalanges. The principal signalling factors from the AER for this include FGF4 and FGF2.

The mesoderm deep to the caudal edge of the AER is called the zone of polarising activity (ZPA) and is stimulated (again, primarily by AER FGFs) to create a polarising signal gradient of the morphogen protein sonic hedgehog (Shh). At the caudal edge of the limb bud, the Shh concentration is highest, which creates the structures of the ulnar side of the hand; progressively more radial structures are formed as the gradient decreases cranially (Tickle, 2006). Shh acts via a variety of signalling pathways that include bone morphogenic proteins (BMPs) and it also stimulates sequential Hox gene activation.

Patterning to create the dorsal and palmar (volar) structures of the hand appears to be governed by expression of Wnt-7a, which is restricted to the dorsal ectoderm of the limb bud. Wnt-7a activity stimulates expression of the Lmx-1 transcription factor, while a different transcription factor, En-1, expressed in the ventral ectoderm, inhibits Wnt-7a expression. Again, this activity is probably linked to Shh secretion and sequential Hox gene expression (Al-Qattan, 2011).

These signalling mechanisms direct the lateral plate mesoderm of the limb bud to generate the bones, ligaments, tendons and vasculature of the limb. However, the musculature and nerves are derived from cells migrating into the bud as it forms. Somatic mesoderm migrates into the limb bud as separate dorsal and ventral condensations, giving rise to the extensor and flexor muscle groups, and with them the dorsal and ventral primary rami of spinal nerves C5–T1. The Schwann cells of these nerves and melanocytes in the limb are derived from neural crest cells which migrate in to the bud in a similar way.

Although many classification systems of congenital upper limb abnormalities have been proposed, the International Federation of Societies for Surgery of the Hand has for a long time adopted is to use the system proposed by Swanson in 1976. This classifies seven groups on the basis of abnormal embryogenesis (Figure 10.1). However, given the enormous spectrum of congenital upper limb abnormalities, no system is comprehensive and around 10% do not fit neatly into Swanson’s classification (Ogino et al., 1986).

The predominant malformations group is then further subdivided according to whether the whole of the limb is affected or the hand plate alone, and whether the primary insult involves one of the three axes of limb development and patterning or is non-axial (Tonkin, 2015). The IFSSH has now adopted the OMT classification. 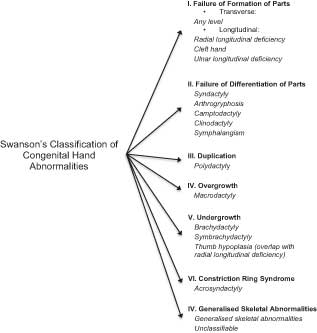 This website uses cookies to improve your experience while you navigate through the website. Out of these, the cookies that are categorized as necessary are stored on your browser as they are essential for the working of basic functionalities of the website. We also use third-party cookies that help us analyze and understand how you use this website. These cookies will be stored in your browser only with your consent. You also have the option to opt-out of these cookies. But opting out of some of these cookies may affect your browsing experience.
Necessary Always Enabled
Necessary cookies are absolutely essential for the website to function properly. This category only includes cookies that ensures basic functionalities and security features of the website. These cookies do not store any personal information.
Non-necessary
Any cookies that may not be particularly necessary for the website to function and is used specifically to collect user personal data via analytics, ads, other embedded contents are termed as non-necessary cookies. It is mandatory to procure user consent prior to running these cookies on your website.
SAVE & ACCEPT
Courses Classes Tutors Community Blogs My Account