What Is Monkeypox? A Microbiologist Explains

On May 18, 2022, Massachusetts health officials and the Centers for Disease Control and Prevention confirmed a single case of monkeypox in a patient who had recently traveled to Canada. Cases have also been reported in the United Kingdom and Europe.

Monkeypox isn’t a new disease. The first confirmed human case was in 1970, when the virus was isolated from a child suspected of having smallpox in the Democratic Republic of Congo (DRC). Monkeypox is unlikely to cause another pandemic, but with COVID-19 top of mind, fear of another major outbreak is understandable. Though rare and usually mild, monkeypox can still potentially cause severe illness. Health officials are concerned that more cases will arise with increased travel.

I’m a researcher who has worked in public health and medical laboratories for over three decades, especially in the realm of diseases with animal origins. What exactly is happening in the current outbreak, and what does history tell us about monkeypox?
A cousin of smallpox

Monkeypox is caused by the monkeypox virus, which belongs to a subset of the Poxviridae family of viruses called Orthopoxvirus. This subset includes the smallpox, vaccinia and cowpox viruses. While an animal reservoir for monkeypox virus is unknown, African rodents are suspected to play a part in transmission. The monkeypox virus has only been isolated twice from an animal in nature. Diagnostic testing for monkeypox is currently only available at Laboratory Response Network labs in the U.S. and globally.

The name “monkeypox” comes from the first documented cases of the illness in animals in 1958, when two outbreaks occurred in monkeys kept for research. However, the virus did not jump from monkeys to humans, nor are monkeys major carriers of the disease. 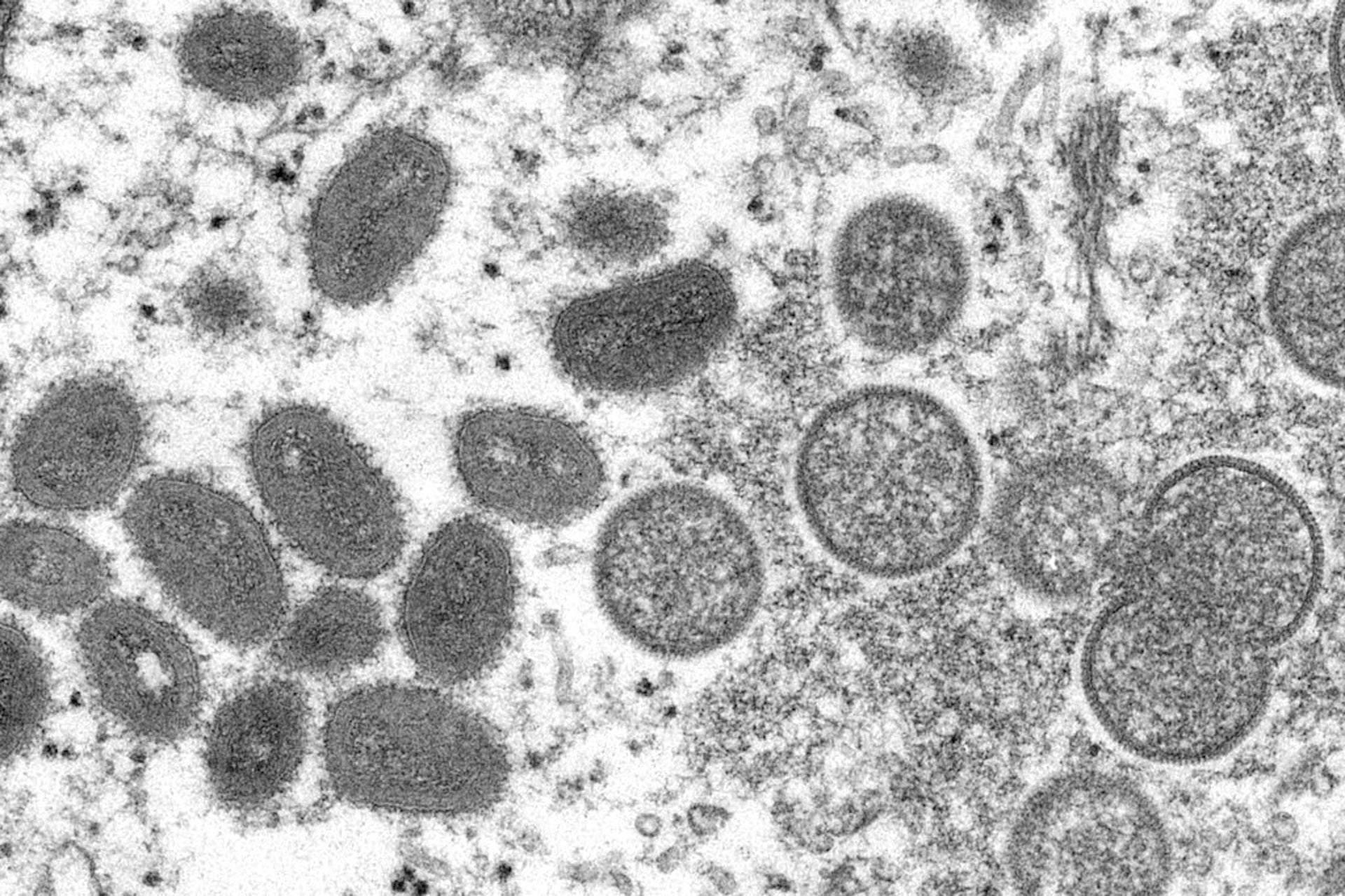 Since the first reported human case, monkeypox has been found in several other central and western African countries, with the majority of infections in the DRC. Cases outside of Africa have been linked to international travel or imported animals, including in the U.S. and elsewhere.

The first reported cases of monkeypox in the U.S. was in 2003, from an outbreak in Texas linked to a shipment of animals from Ghana. There were also travel-associated cases in November and July 2021 in Maryland.

Because monkeypox is closely related to smallpox, the smallpox vaccine can provide protection against infection from both viruses. Since smallpox was officially eradicated, however, routine smallpox vaccinations for the U.S. general population were stopped in 1972. Because of this, monkeypox has been appearing increasingly in unvaccinated people. 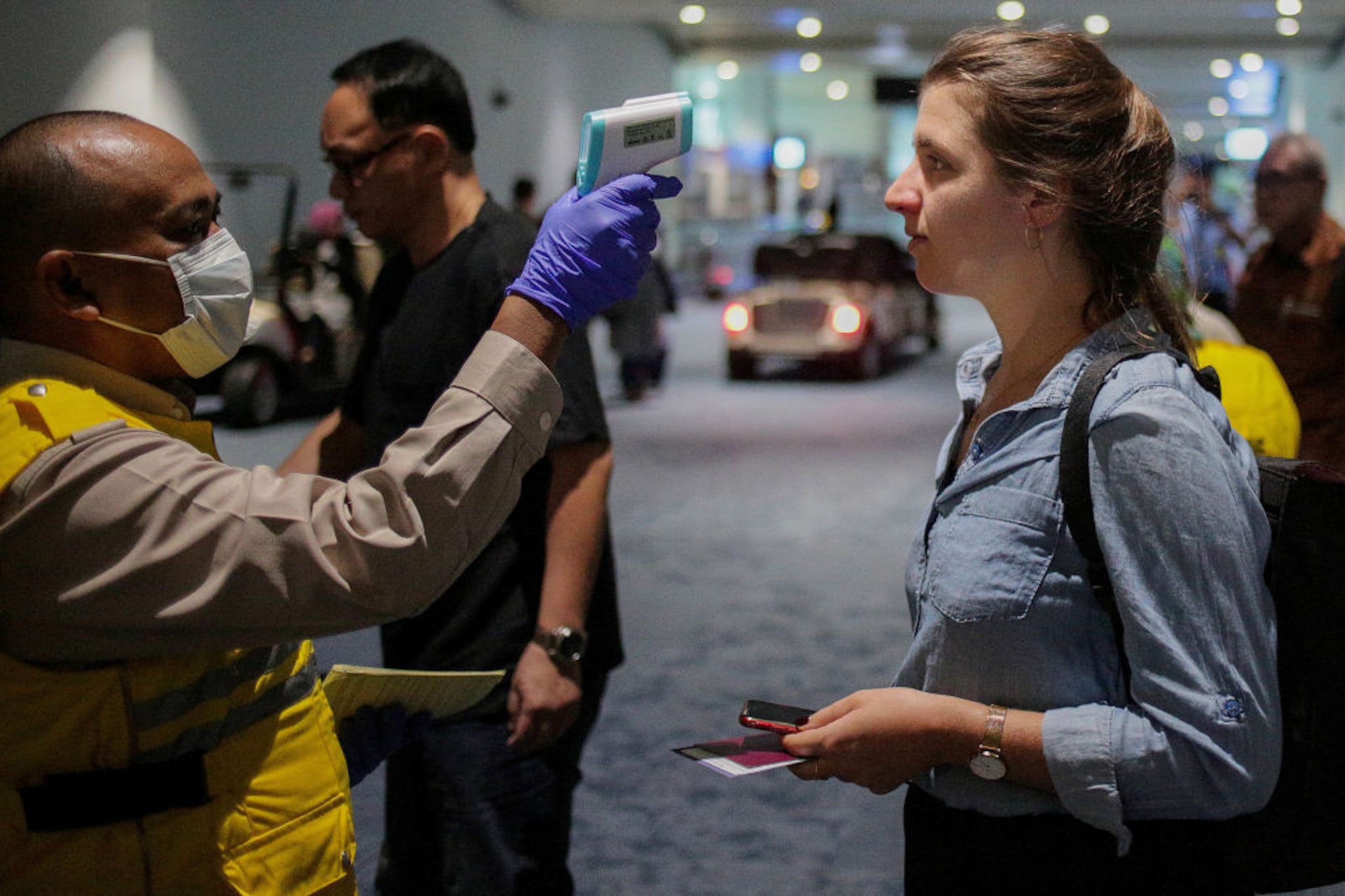 Indonesia began screening travelers after a monkeypox case was reported in Singapore in May 2019. Jepayona Delita/Future Publishing via Getty Images
Transmission

The virus can be transmitted through contact with an infected person or animal or contaminated surfaces. Typically, the virus enters the body through broken skin, inhalation or the mucous membranes in the eyes, nose or mouth. Researchers believe that human-to-human transmission is mostly through inhalation of large respiratory droplets rather than direct contact with bodily fluids or indirect contact through clothes. Human-to-human transmission rates for monkeypox have been limited.

Health officials are worried the virus may currently be spreading undetected through community transmission, possibly through a new mechanism or route. Where and how infections are occurring are still under investigation.
Signs and symptoms

After the virus enters the body, it starts to replicate and spread through the body via the bloodstream. Symptoms usually don’t appear until one to two weeks after infection.

Monkeypox produces smallpox-like skin lesions, but symptoms are usually milder than those of smallpox. Flu-like symptoms are common initially, ranging from fever and headache to shortness of breath. One to 10 days later, a rash can appear on the extremities, head or torso that eventually turns into blisters filled with pus. Overall, symptoms usually last for two to four weeks, while skin lesions usually scab over in 14 to 21 days.

While monkeypox is rare and usually non-fatal, one version of the disease kills around 10% of infected people. The form of the virus currently circulating is thought to be milder, with a fatality rate of less than 1%.
Vaccines and treatments

Treatment for monkeypox is primarily focused on relieving symptoms. According to the CDC, no treatments are available to cure monkeypox infection.

Because smallpox is closely related to monkeypox, the smallpox vaccine can protect against both diseases.

Evidence suggests that the smallpox vaccine can help prevent monkeypox infections and decrease the severity of the symptoms. One vaccine known as Imvamune or Imvanex is licensed in the U.S. to prevent monkeypox and smallpox.

Vaccination after exposure to the virus may also help decrease chances of severe illness. The CDC currently recommends smallpox vaccination only in people who have been or are likely to be exposed to monkeypox. Immunocompromised people are at high risk. 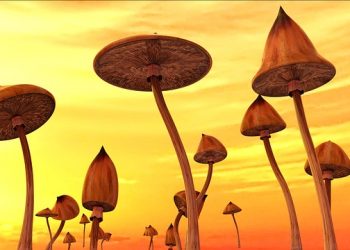