Although there can be a great deal of variation in the extracellular domains of RTKs (Figure 23b) and in the ways the extracellular signal binds to its receptor, the basic mechanism of receptor activation still applies (Figure 24). Association between receptors results in cross-phosphorylation of the kinase domain on each intracellular tail of the RTK, a process called autophosphorylation. This results in an increase in its intrinsic kinase activity, which causes phosphorylation of tyrosines in other parts of the cytoplasmic domain (and/or other proteins). Autophosphorylation generates docking sites on the receptor for downstream signalling proteins that contain SH2 domains.

Many proteins can bind to phosphotyrosine (pY) residues, but these interactions are influenced by nearby amino acid side-chains (see previous section). For example, the PDGF receptor has specific phosphotyrosine sites, which can bind the regulatory (p85) subunit of phosphatidylinositol 3-kinase (PI 3-kinase), a GTPase-activating protein (p120 RasGAP) and phospholipase C-g (PLC-γ), among others (Figure 25). 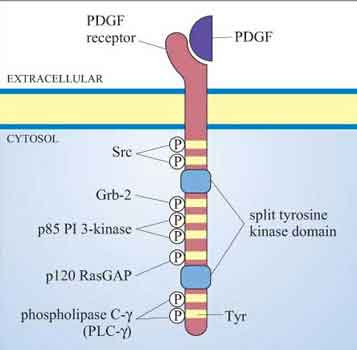