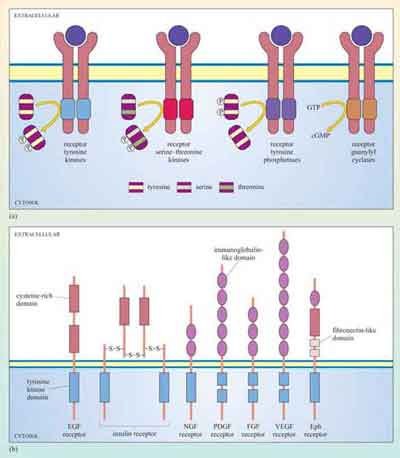 Figure 23 (a) The four classes of receptors with intrinsic enzymatic activity. Note that the kinase domains can phosphorylate residues located on the other receptor chain (autophosphorylation) or on other signalling proteins (as shown here). Note that receptors with intrinsic enzymatic activity with the exception of tyrosine phosphatases, have been represented in their active state, that is, following the formation of dimers by the extracellular ligand. In contrast to other receptors, receptor tyrosine phosphatases suppress their enzymatic activity upon ligand binding. (b) The seven subfamilies of receptor tyrosine kinases (RTK). The functional role of most of the cysteine-rich, immunoglubulin-like, and fibronectin-like extracellular domains are not known. Only one member of each subfamily is indicated. Note that the PDGF, FGF and VEGF receptors have a split tyrosine kinase domain; the PDGF receptor is shown in more detail in Figure 25. (EGF = epidermal growth factor; NGF = nerve growth factor; PDGF = platelet-derived growth factor; FGF = fibroblast growth factor; VEGF = vascular endothelial growth factor; Eph = ephrin.)