Individual domains often retain their function when isolated from their parent protein, and they can be genetically engineered to be fused with other proteins/peptides. Recombinant fusion proteins consist of two proteins: (a) a protein or peptide sequence used as a tag to facilitate protein isolation; and (b) the ‘bait’ protein, used as a means of indirectly ‘pulling down’ interacting proteins. One very useful example of this technique is the use of glutathione S -transferase (GST) fusion proteins; they consist of GST (tag) fused to a protein or part of a protein of interest (bait).

Using recombinant DNA technology, the DNA encoding the domain of interest is inserted into a plasmid vector just downstream of, and in the same translation reading frame (ORF) as the gene for GST. Under optimized conditions, certain strains of bacteria are induced to take up the plasmid and grown in selection media. Expression of the fusion protein is then chemically induced in transformed bacteria, which are subsequently lysed in a detergent solution. GST is used as the fusion partner because it binds glutathione, a property that can be exploited to purify the fusion protein by affinity chromatography. Free glutathione can be used to elute the fusion protein from the column. The GST can then be cleaved from the protein being investigated, if not further required. This gentle technique produces fusion protein of sufficient quantity and quality for use in, for example, binding assays and enzyme activity assays. Figures 16 and 17 show one example of its use. 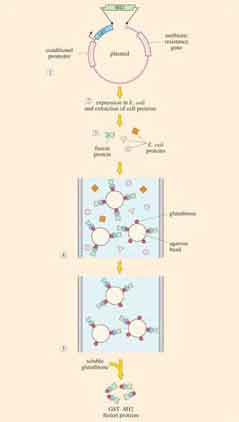 (1) The coding sequence of the SH2 domain of a protein is inserted into a plasmid in the same translation reading frame as GST, and under the transcriptional control of a conditional promoter (which initiates transcription if a particular transcriptional activator is added to the culture medium). The plasmid also contains an antibiotic resistance gene to select transformed bacteria (2). Expression of the GST fusion protein is induced in transformed E. coli. The bacteria are then lysed in a detergent solution that contains all the intracellular bacterial proteins and the GST fusion protein. (3) The bacterial lysate is added to a chromatographic column containing agarose beads coated with glutathione. (4) The column is first washed to get rid of bacterial proteins. (5) The column is then washed with excess free glutathione, which binds to the recombinant GST–SH2 fusion protein and elutes it from the column. 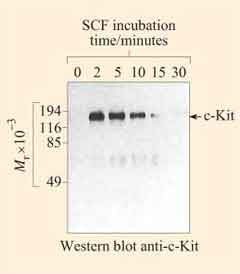 Figure 17 A GST–SH2 fusion protein, in which the SH2 domain is derived from a tyrosine kinase called CHK, was expressed as in Figure 16.

The fusion protein was incubated with a lysate of CMK cells (see experiment in Box 1.1, Figure 9), the GST–SH2 fusion protein, together with proteins bound to the SH2 domain, was purified by affinity chromatography to a glutathione–agarose column, and separated by denaturing SDS–PAGE. The gel was then Western blotted and probed with an anti-c-Kit antibody. c-Kit can be seen to rapidly, but transiently, associate with the GST–SH2 fusion protein. (Data from Jhun et al., 1995.)

This website uses cookies to improve your experience while you navigate through the website. Out of these, the cookies that are categorized as necessary are stored on your browser as they are essential for the working of basic functionalities of the website. We also use third-party cookies that help us analyze and understand how you use this website. These cookies will be stored in your browser only with your consent. You also have the option to opt-out of these cookies. But opting out of some of these cookies may affect your browsing experience.
Necessary Always Enabled
Necessary cookies are absolutely essential for the website to function properly. This category only includes cookies that ensures basic functionalities and security features of the website. These cookies do not store any personal information.
Non-necessary
Any cookies that may not be particularly necessary for the website to function and is used specifically to collect user personal data via analytics, ads, other embedded contents are termed as non-necessary cookies. It is mandatory to procure user consent prior to running these cookies on your website.
SAVE & ACCEPT
Courses Classes Tutors Community Blogs My Account