How to diagnose diabetes

Diabetes is a condition that results in an increased concentration of blood glucose and for diagnosis, accurate measurements of blood glucose levels are required. Blood glucose levels can be measured on different samples of blood. Sometimes the whole of the blood sample is used. This occurs when finger prick samples are measured on small personal meters. For more accurate measurements, the sample of blood is taken to a laboratory and the blood cells are removed. Measurements are then made on the liquid remaining, called plasma. (The terms ‘plasma glucose’ or ‘plasma cholesterol’ may be familiar to you.) The results using the whole blood sample and the plasma sample will be slightly different because the presence of blood cells affects the test, so it is important to know which is being quoted.

We have already mentioned that the body normally keeps the glucose level controlled. When this control is lost the person has diabetes. It is worth spending a few minutes thinking about how the control of the glucose level might be lost.

Question: From what you have read so far, describe the possible patterns of insulin production in a person without diabetes. 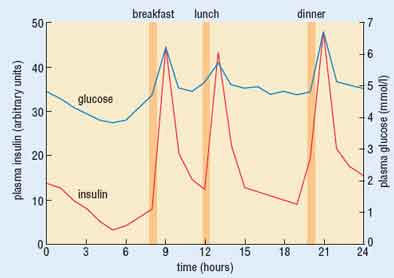 Figure 6 Levels of plasma insulin and glucose over 24 hours in someone who does not have diabetes. As the glucose level rises so does the level of insulin (The scale for the insulin curve,  in arbitrary units, is shown on the left-hand vertical axis, the scale for the glucose curve on the right-hand axis)

The level of glucose that is used to diagnose diabetes is defined by the World Health Organization. The value of the level has been changed over the years and was most recently updated in 1999 (WHO, 1999).

A person with symptoms of diabetes and a venous plasma glucose taken at random (i.e. measured at any time) equal to or more than 11.1 mmol/l has diabetes.

If a patient has no symptoms or their random level is not definitely abnormal, then two abnormal plasma glucose levels are required for a diagnosis. These tests should be performed on different occasions.

Most commonly, the diagnosis of diabetes is made using fasting plasma glucose levels. The person having the test should fast for 8–14 hours before the test is carried out (the test is usually done in the morning after an overnight fast, before any food is consumed).

A fasting plasma glucose greater than or equal to 7.0 mmol/l is abnormal.

When there is uncertainty about the diagnosis an oral glucose tolerance test (OGTT) is used. For example, in someone with fasting plasma glucose between 6 and 7 mmol/l, the doctor may consider performing an OGTT to be sure that the person does not have diabetes.

The OGTT involves a person (adult) receiving 75 g (grams) of oral glucose, taken in the form of a drink, i.e. 75 g of anhydrous (dry) glucose in 250–300 ml of water. ‘Oral’ simply amount of Lucozade®. The manufacturer of Lucozade® provides information about how much needs to be taken. The drink should be taken over 5 minutes. Plasma glucose levels are measured prior to the glucose drink and after a period of 2 hours (the result of this test is commonly termed a ‘2-hour glucose’ by clinicians).

The person having an OGTT should:

A ‘2-hour glucose’ after a 75 g oral glucose tolerance test equal to or greater than 11.1 mmol/l is abnormal.

Either the fasting result(s) or the OGTT result(s) can be used in making a diagnosis. However, the doctor needs to be sure of the correct diagnosis and may need to perform further additional tests to confirm it. For example, a person with a fasting glucose of 7.0 mmol/l on two occasions has diabetes even if the OGTT was less than 11.1 mmol/l (for example, fasting 7.0 mmol/l and 2-hour glucose 9 mmol/l). Similarly, if the fasting levels are less than 7.0 mmol/l but the OGTT more than or equal to 11.1 mmol/l on two occasions then the person has diabetes (for example, fasting glucose 6.4 mmol/l and 2-hour glucose 13 mmol/l).

It is not uncommon for one of the tests to be normal and the other to be abnormal and this makes diagnosis more difficult.

In patients with diabetes, changes occur within the small blood vessels, particularly those in the eyes and kidneys. Microvascular complications can also affect the blood supply to nerves, leading to nerve damage. Macrovascular is a term used to describe the large blood vessels of the body, for example those that go to and from the heart, the arms and the legs. In patients with diabetes, changes occur within these large blood vessels as well as in the small blood vessels. Chronic is a term that refers to things that take place over a long period of time.

The threshold levels of blood glucose discussed above have been chosen on the basis of epidemiological data. Epidemiology is the study of diseases and risk for diseases in populations. The information has been collected in large populations of people with and without diabetes. One of the reasons that these levels of blood glucose have been chosen is that they are associated with a risk of the complications seen in people with diabetes. If people have blood glucose at these levels and above, they are at a much higher risk of developing diabetes complications in the long term compared with someone whose levels are lower.

We shall discuss risk later in this course.