What determines whether a particular mRNA molecule is translated by ribosomes that are free in the cytosol or by ribosomes that are attached to the RER? The answer lies again in the amino acid sequence of the protein being synthesised. In fact, translation of all eukaryotic mRNAs starts on ‘free’ ribosomes in the cytosol (Figure 18a), but if an mRNA encodes a protein that is destined for lysosomes, or to be secreted from the cell, or to be embedded in a cell membrane, the ribosome is rapidly redirected to the endoplasmic reticulum by a process known as cotranslational localisation. As soon as the beginning of the translated polypeptide (which is known as the N-terminus, or amino (NH2) terminus) starts to emerge from the free ribosome, a signal sequence for localisation to the RER, close to the N-terminus, is recognised by a protein complex called the signal recognition particle (SRP). Translation pauses, and the whole complex, including the ribosome, mRNA and partially translated polypeptide, is transported to the membrane of the RER. There, translation recommences and the growing polypeptide chain is simultaneously translocated across the membrane of the RER and starts to enter the RER lumen, the space inside the RER (Figure 18c). 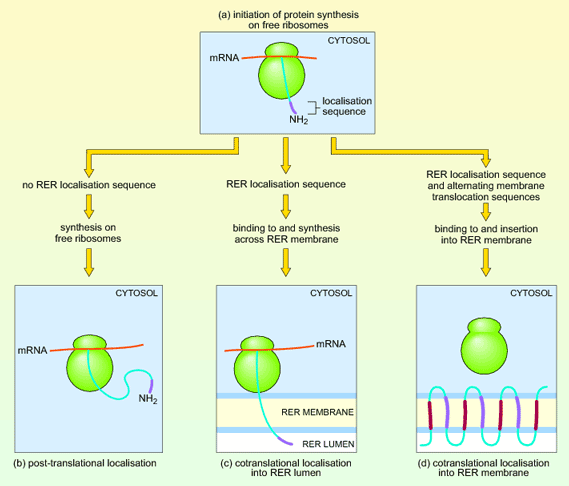 One of two things may then happen: for some proteins, the translated polypeptide continues to enter the RER lumen, until finally the completed polypeptide is released inside the RER. These proteins usually pass on to the Golgi apparatus (see Section 4.7) and are eventually secreted from the cells or packaged into lysosomes. Alternatively, some proteins remain partly embedded within the RER membrane.

That is indeed what happens; a stop-transfer signal halts translocation and the protein remains embedded in the ER membrane. These proteins are either destined to be delivered to other membranes, usually the cell membrane, or remain in the ER, where they play a role in ER function. Some proteins, many of them receptor proteins, are ‘multipass’ transmembrane proteins.

The proteins translated in the RER are then modified in different ways. One important modification that begins in the RER is protein glycosylation; that is, the addition of sugar residues; glycosylated proteins are known as glycoproteins (Figure 7). Some sugar residues can also serve as part of the ‘address label’, and are involved in protein targeting later on; others have different roles. The initial glycosylation of proteins occurs in the RER, through the action of enzymes that are embedded within the RER membrane. The modified proteins that are destined for export or to be delivered to lysosomes or the cell membrane, then pass from the RER to the Golgi apparatus (see Section 4.7), for further processing.