What is Bacterial Antibiotic Resistance?

Bacterial antibiotic resistance is the ability of pathogenic bacteria to resist treatment with antimicrobial agents such as antibiotics. Antibiotic resistance is a serious threat to global health, because it jeopardizes treatment of an increasingly large number of infections caused by bacteria, fungi or a virus. According to the World Health Organization in 2012, there were about 450 000 new cases of multidrug-resistant tuberculosis. Extensively drug-resistant tuberculosis has been identified in 92 countries. Resistance to earlier generation antimalarial drugs is widespread in most malaria-endemic countries. There are high proportions of antibiotic resistance in bacteria that cause common infections (e.g. urinary tract infections, pneumonia, bloodstream infections) in all regions of the world.

A high percentage of hospital-acquired infections are caused by highly resistant bacteria, such as methicillin-resistant STAPH (MRSA), or multidrug-resistant Gram-negative bacteria. Gonorrhea may soon become untreatable, because treatment failures using third-generation drugs were reported from 10 countries and no vaccines or new drugs are in development. Patients infected with a drug-resistant pathogen are at an increased risk of worse clinical outcomes (even death), and generally require more healthcare resources compared to patients infected with a non-drug resistant strain. The Center for Disease Control estimates the direct costs associated with hospital infections are as high as $45 billion dollars each year. With the emergence of bacterial strains that are resistant to multiple treatments, there is an increased urgency to understand how bacterial defense mechanisms are triggered in the presence of antibiotics.

Bacterial antibiotic resistance emerges for three reasons. (1) Antibiotics became the to-go treatment for infections and were often prescribed unnecessarily. (2) Patients sometimes do not finish their prescription, but stop taking the antibiotic once they feel better. In this case, the treatment is stopped before the infection is completely eliminated leading to propagation of resistant bacteria. (3) Bacteria have an intrinsic ability to thrive in toxic environments by becoming resistant to these toxins.

How do bacteria become resistant to antibiotics? There are four different mechanisms by which bacteria become resistant to antibiotics (Fig. 1.2). (A) The bacteria may degrade or modify the antibiotic. An example for this strategy is production of the enzyme β-lactamase that degrades antibiotics of the penicillin family. (B) Bacteria may undergo mutagenesis and change the target of the antibiotic. A good example are antibiotics that exert their function by directly binding to the ribosome thus halting bacterial translation. Once the relevant part of the ribosome is mutated, the antibiotic cannot bind to it and is no longer a successful therapeutic against that bacteria. (C) The antibiotic can be prevented from entering the cell. Mycobacterium is typically more resistant to treatment, because its waxy cell envelope prevents entry of antibiotics. (D) Antibiotics may be removed from the cell with the help of efflux pumps. Efflux pumps are integral membrane proteins that pump toxins out of the cell. They are either specific to one drug or pump multiple drugs out of the bacteria. The latter type is called multidrug-resistance efflux pump or MDR pump. The toxin sensor studied in the mini project regulates expression of a MDR efflux pump in Bacillus subtilis. Counterparts of the sensor are found in many Gram-positive bacteria. 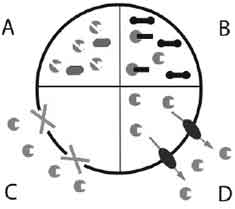 Figure 1.2: Bacteria render antibiotics ineffective using one of four strategies: they degrade the antibiotic (A); they alter the target through mutation (B); they block the entry of antibiotics (C) or pump them out of the cell with the help of efflux pumps (D).